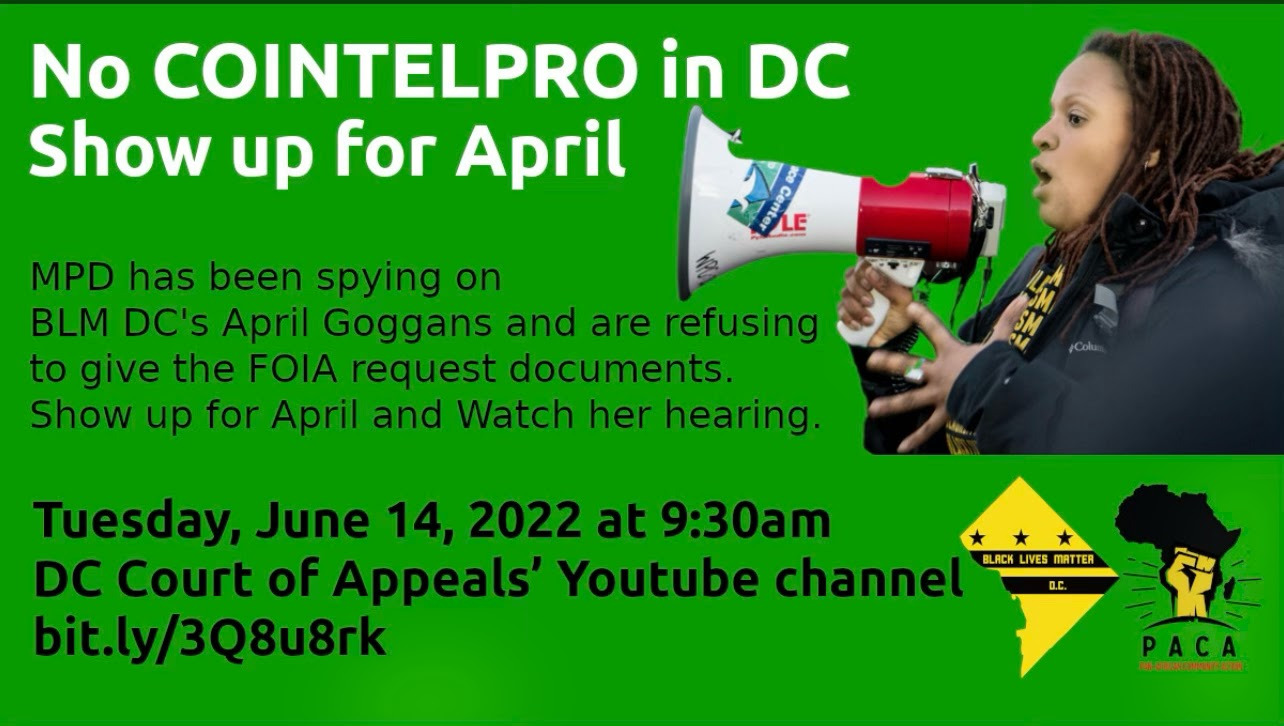 The DC government is deploying COINTELPRO like tactics against organizations and individuals fighting to protect and expand our rights. Of course, this is not news to those who have been engaged in political work here for any amount of time, but now, thanks to one local organizer, there is proof.

Suspecting she was being surveilled by the Metro Police Department (MPD), April Goggans of Black Lives Matter DC (BLMDC) filed a Freedom of Information Act (FOIA) request for the documents the DC government had on her. After years of hiding, stalling and lying by MPD, April took the request to court. The most important hearing to date is scheduled for June 14, 2022 at 9:30am is open to the public using the online court system and will determine if MPD is required to follow FOIA laws.

This hearing is important for anyone organizing in the DMV and anyone concerned about public access to government information, police and government official misconduct and the use of police to spy on perceived political opponents.

Beyond the individual case, the persistent use of COINTELPRO tactics- such as spying, intimidation and disruption- to attack organizations fighting for basic human rights, demonstrates the need for radical social transformation and for Community Control Over Police. 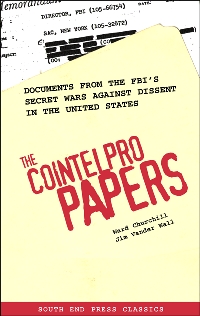 COINTELPRO (Counter Intelligence Program) was an institutional operation inside the FBI that surveilled and infiltrated rights organizations in the US with the intent of disrupting, discrediting and even “neutralize” those organizations. The CIA even created its own domestic spy and disrupt program entitled Operation CHAOS. While COINTELPRO targeted a broad range of organizations deemed ‘subversive’ by the government, including feminists, socialists, animal rights, Muslim, American Indian and even civil rights, some of the most brutal actions targeted Black Power type organizations.

COINTELPRO would spy on individual members, harassing them at home, work, or with relatives in an attempt to intimidate them out of the organization. The FBI would put pressure on the individual member by harshly questioning their relatives or people leaving a meeting or gathering with them. The FBI would also infiltrate to spread misinformation inside and among organizations in order to cause infighting and generally destabilize the groups. The program ultimately arrested hundreds of organizers on trumped up charges and planted evidence, creating an entire generation of political prisoners in the US. Under the auspices of COINTELPRO, the FBI assassinated numerous members of the Black Panther Party and other organizations.

Organizations complained bitterly about government spying, infiltration and even support for right wing groups. The media ignored the complaints and called them paranoid conspiracy theorists.

On the night of March 8, 1971, the Citizens Commission to Investigate the FBI broke into an FBI office in Pennsylvania and made public the documents confirming the existence of the then-secret government program. Even though the documents were known to be legitimate, most news organizations refused to publish them, not unlike the treatment of Wikileaks documents in the modern era. After reporting by the Washington Post, the government admitted their actions were illegal and the program was formally shuttered. However, most present day organizers assume the program continues in some modified form, spying on and disrupting socialist, feminist, prison abolitionist, animal rights, environmental, labor, and Black Power organizations.

Who is April Goggans

April Goggans is a long time DC resident and organizer for Black Lives Matter DC (BLMDC). As a vocal critic of the DC administration and police, for years April noticed the Metro Police Department (MPD) following her and monitoring the activities of her organization in the community and meetings at her home. The police would even stop and question people leaving her home or other meeting spaces with her, in blatant attempts to intimidate people from meeting with her.

Consequently, in June 2017, April filed a Freedom of Information Act (FOIA) request with MPD, asking them to release documents, emails and other messages relating to April Goggans, her home address and organizations she is associated with to confirm her suspicions that the DC government was using the police to spy on her based on her political views and activism.

MPD initially refused to confirm or deny that they were spying on her, but after administrative wrangling, MPD claimed that there were no documents, emails, texts or other records that matched what she was searching for. Unsatisfied with the answer, April took MPD to court for the records.

In an April 2018 court filing, MPD revealed that the reason they kept getting zero results in their search for records relating to April Goggans was that they neglected to include the term “April Goggans” in the query. After being forced by April’s legal team to include her name in the search for records about her, the results ballooned from 0 records to 3,699. MPD, however, still claimed that none of those records were relevant because they did not “discuss or otherwise describe any monitoring or surveillance.” (Def. Notice Apr. 13, 2018, Appx 216-217).

To literally no one’s surprise, it turned out that was not true either. Police later defended themselves by asserting that the emails did not describe “monitoring or surveillance,” but only officers “keep[ing] an eye out,” or “check[ing]” on April or events she help organize.

When asked to expand the query- by search, for example, for “Goggans,” instead of “April Goggans,” or by her home address, or similar searches- the results grew to 9,000 pages of emails and notes. But police again claimed that not even one of those records were relevant because it did not meet their definition of surveillance.

After all of that, MPD had the nerve to file a motion to dismiss April’s suit against them because they completed the requested search! Given the fact that the police delayed, concealed and hid information from April- and even the court- you know what happened next: on March 13, 2019, the judge granted MPD’s motion to dismiss. Judges are not independent third party “umpires,” and do not care about your rights anymore than do the police.

April’s legal team immediately appealed the decision, but due to COVID and other factors, that appeal is only now making it’s way to a hearing scheduled for June 14, 2022.

The current DC government, through its police department, are running a modern day COINTELPRO operation to spy on and deny rights to those who are fighting on our behalf. They are also surely doing the same to disrupt and cause chaos inside of those organizations. Of course, no judge in DC would force them to disclose those documents and there is no Citizens Commission to Investigate MPD to expose the truth for us.

After a negotiating period, in May 2019 a ransomware group called Babuk dumped 250GB of MPD data on the dark web, including psychological profiles and home addresses of police officers and internal emails. The emails range from the mundane to petty interpersonal squabbling to details about the inner workings of the organization. The emails were also about who the MPD spied on, including April Goggans.

The data dump was not noble- Babuk wanted a payoff to keep thing quiet- but it did reveal that at least some of those emails were relevant to the search for documents relating to MPD spying on April. Even though everyone knew that to be true, the FOIA did not prove it any more than the courts. It was proven by a break-in into DC police servers and then making those documents public.

In February 2022, Amy Phillips, a public defender in DC, and several others, filed a lawsuit against the DC government charging that MPD intentionally delays or denies people access to government documents to which they are entitled, if they are deemed by DC to be critical of the government.

After having her requests for information delayed and denied, even though she needed them as part of her criminal defense work, a government whistle blower revealed that Phillips and others were on a government list. Former FOIA officer Vendette Parker revealed that when someone on that list requested information from MPD, superiors who were normally not part of this routine administrative procedure were notified and the results were delayed, redacted or denied all together.

April Goggans’ June 14, 2022 hearing at 9:30am will not determine if she has the right to those documents- she does. It will not even determine if the courts are on the side of right, because they have already demonstrated they are not. In the short term, the hearing will determine if the courts will declare that the politicians and police are required to follow the law in this specific instance, even after declaring that they are not after the previous hearing.

In the long term, the hearing can help determine if social movements can win political space from where we can organize for our rights and for power. What is crystal clear, however, is that the politicians, the city government, the police and the courts are actively working against our movements. They are not trying to help us and failing. They are conspiring to stop us and succeeding.

MPD has enough time, resources, equipment and political will to spy on April Goggans for demanding an end to gentrification and police murders. The very same department, however, is unable to uncover a plan, shared by tens of thousands of people, attempting to overthrow the operations of the federal government.

This society- from government officials to history lessons to the media- brags about the freedom of speech it affords to regular people. However, if as a result of speaking out, the speaker is spied upon, harassed, lied to, and denied access to public documents AND the perpetrators go unpunished for the violation of rights, then there is no freedom of speech. There are greater consequences to exercising free speech than there are to denying constituents their rights. Violent White Supremacists, of course, excepted.

As such, we cannot build movements designed to convince oppressive institutions- be they mayors, police, prisons, or the courts- to defend the very rights that they themselves are denying us. We must build movements that shift power from those who oppress us into our own hands.

We cannot ensure the police will stop spying on those fighting on our behalf by lobbying them, filing administrative requests or suing them. To be clear, these are important steps to take as we struggle to win democratic rights and space inside of the current power dynamics. However, the only way to ensure the police do what we want is to control the police.

While this battle is for transparency and accountability in the MPD, essentially demanding that they simply do what they promised to do in the first place, the broader war is not for transparency of a government institution, it is for control over that institution. We must control the institutions that impact our lives. We must win Community Control Over Police.

No COINTELPRO in DC