PACA's Radical Response to the Coronavirus 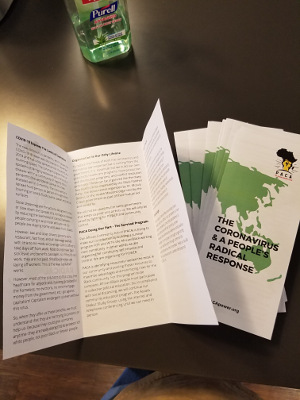 We feel this is the time to go into the community with the combination of material aid and political education for building a people's program for survival and power.

To reduce the threat of both the coronavirus and the martial law response that is coming from the government, it is essential that we build our own grassroots healthcare programs, food production and distribution programs, and conflict resolution processes.

We’re calling on African/Black working class people to join our efforts. Our problem is not only the coronavirus. Once this pandemic is under control, we still face poverty, other diseases, intra-community violence, and police brutality. Our only hope is through organizing for our total liberation through community control. Become a PACA member. Help us build for our survival and for a better life beyond COVID-19.

Trump wants to “surge” against urban Black and brown Americans in the same way that the US surged against Iraq and Afghanistan.

“No matter how many cases of murderous police brutality there are, each is treated like an isolated incident.”

If withholding US military aid from a neo-Nazi friendly  government in Ukraine is unacceptable, then it is only logical that a fascist police surge on Black and Brown communities in the US is acceptable.

PACA at the No War with Iran March in Washington, DC 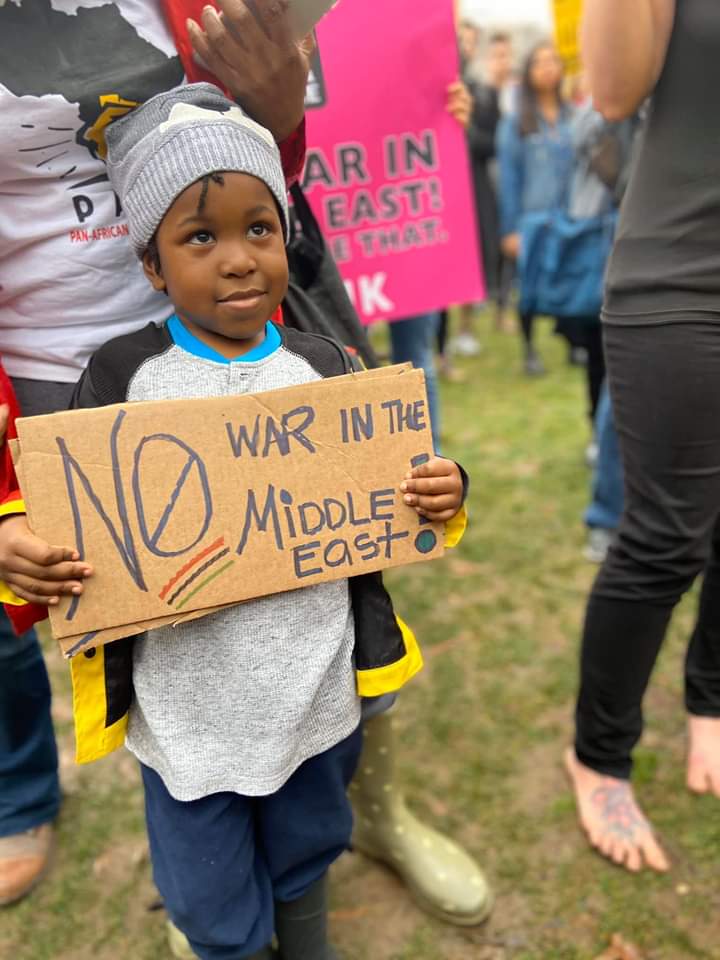 The phony US Left specializes in finding excuses to betray victims of US imperialism.

“It apparently does not matter to liberals that the forced takeover in Bolivia is unconstitutional and US support for it is a flagrant violation of international law.”

Trump administration sanctions that impose new travel restrictions on Cuba are aimed at Cuba's economy and will have no effect on Cuba's support for Venezuela, says Netfa Freeman of PACA featured on the Real News Network.

The Black Working Class and Venezuela: Fighting The Same Enemy

Netfa Freeman discusses the unique perspective of the Embassy Protection Collective's work through the lens of the Black working class and their connection with Venezuela with the Real News Network.

The Assata Shakur Study Group is a twice monthly political training ground for PACA and community members, held on the 2nd and 4th Wednesday of each month and hosted by the ONE DC Black Workers Center at 2500 Martin Luther King Ave SE, Washington, DC.

Forward from Ferguson offers in depth analysis of the recent urban rebellions and how Black communities can use human rights and self-determination to navigate these challenging times.

Shutting down AFRICOM and the New Scramble for Africa

The US must cease its military occupation of Africans at home and abroad, and abandon its attempt to rule the world by force.

Taking the Black Struggle to the United Nations

The lack of self-determination and the need for Black people power is evident in every aspect of working poor Black life in the United States. Most recently, news from DC Metropolitan Police Department (MPD) brings our focus to policing.

On December 5, 2017 the MPD Use of Force Review Board (UFRB) found the killing of Terrence Sterling by police officer Brian Trainer unjustified and recommended that Trainer be fired from the department.

What Western Imperialism Is Up to Now in Zimbabwe

“The capitalist agenda is to neo-colonize Zimbabwe and appropriate its labor and land.”

When the press and media of the so-called Western world adjust their depiction of a nation they had formally demonized to one worthy of cooperation we should pause for a more critical analysis.

PACA Stands with the People of the DR Congo

PACA Stands with the People of the DRCongo Pan African Community Action (PACA) stands in solidarity with the Telema Movement and the people of the Democratic Republic of Congo in their clear unified demand to have a self determined future and the removal of President Joseph Kabila. The Congolese youth have spoken. They have taken to the streets to express their rejection of the Kabila regime’s attempt to stay in power even though his term limits have expired. After suffering for 15 years under the brutality of Kabila and his security forces, the people have decided they no longer want an elitist authoritarian regime. Instead, they want to hold democratic presidential elections in order that they themselves decide the future course of their nation. To PACA the self determination of the people of the Congo, is of upmost importance. We define self determination as a people, and/or a nation having full decision making powers over their own destiny, something that should be supported by all freedom loving peoples.

After 11 months of secrecy in the case of Alonzo Smith, who was killed by special police in Southeast, Washington, DC, November 1, 2015, Assistant U.S. Attorney Jean Sexton is scheduled for a private meeting with Beverly Smith, mother of Alonzo and organizer of Pan-African Community Action (PACA). Sexton is the prosecutor assigned in grand jury proceedings of the case and PACA is the organization co-founded by Beverly Smith in response to the killing of her son. It is unknown what information will be revealed in the Thursday, October 13, 12 noon  meeting at the Office of the United States Attorney in Judiciary Center.

Brexit: A Nail in the Coffin of Neo-colonialism in Africa

by Netfa Freeman
Brexit is cause for celebration for the peoples of Africa, Asia and Latin America. The European Union is the historical heir to the Berlin Conference of 1884 that divided the world into Euro-North American spheres of dominance. Europe has inflicted immense suffering on the rest of the planet. “Believing Brexit could represent the beginning of the end for international cooperation, is to believe that the world does or should revolve around Europe.”

by Netfa Freeman
Cuba opened discussions with the U.S. on human rights, last week, with a reminder that the United States is no model for other nations. The Cubans cited “discrimination and racism patterns in U.S. society, the worsening of police brutality, torture acts and extrajudicial executions in the fight on terror and the legal limbo of prisoners at the US prison camp in Guantanamo."

by Netfa Freeman
A United Nations Working Group preliminary report on human rights violations against Black America advocates Black community control of police. That’s the general position of Pan African Community Action, one of the groups that testified before the UN experts. Community control of police would shift power, enforce democracy and allow folks to re-imagine community security as “a social force to actually protect and serve” Black people.