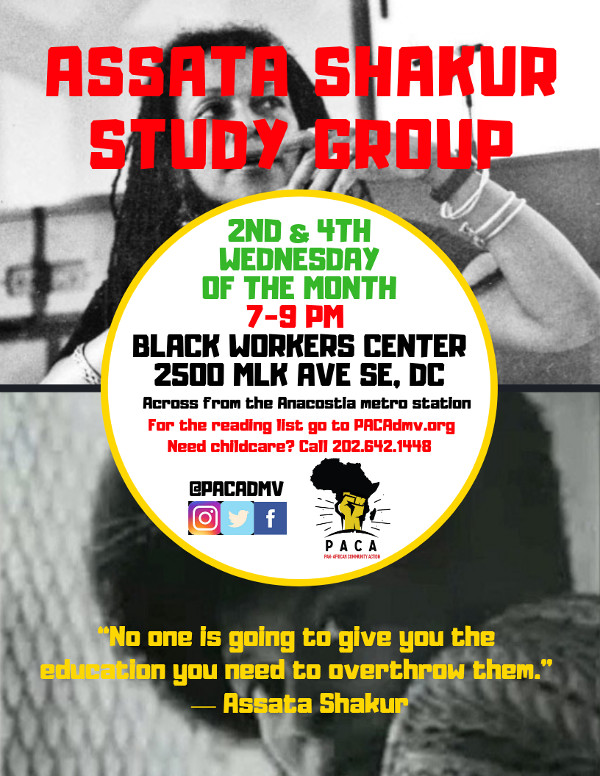 Since it's inception, PACA has focused on political education as its primary work and Program. Because most African people are not familiar with Pan-Africanism and because understanding the systems of Capitalism, White Supremacy and Patriarchy require thought and discussion, PACA sought to deliberately build political unity through political education.

However, since it's founding in 2015, this process of building political unity was split into two separate parts: Internal Political Education, an in depth study of ideology and political issues for active PACA members that took place during weekly member meetings, and Popular Education, a monthly community discussion geared towards new and potential members.

Popular Education served as an introductory level political orientation and also a chance to organize an event each month as a means of building organizational leadership skills and to practice working together. And Internal Political Education was seen as a responsibility of PACA membership: to engage in study as part of building an organization. However, as PACA grew and evolved, the two separate entities merged.

The first problem was that as PACA's Campaigns grew and Events became more numerous, members had to make tough decisions during meetings: do we end organizational business early so we can do Political Education or do we skip Political Education so we can continue organizational business? When both were deemed too important to cut back, the results were marathon meetings that did not seem to end.

At the same time, PACA members needed a new challenge. Was one Popular Education per month enough work? Additionally, PACA struggled with the question of whether the political education process for organization members should be different and removed from the political process for community members.

Second, Programs and Committees were strengthened. Membership meetings are now more about the big picture, but implementation must happen at the Campaign, Program and Committee level. This also means that members are no longer able to float around in the general membership, as their organizational responsibilities are carried out in their Campaign, Program or Committee.

Assata Shakur Study Group sessions are open to the public, just like the old Political Education sessions, but there is still required reading and the level of discourse is more challenging, although the pace of discussion is customized to meet the participants where they feel comfortable. The Study Group has also found a permanent home through a strategic partnership with ONE DC's Black Workers Center in Anacostia.

Assata Shakur is a great African Freedom Fighter who is alleged to have been part of the Black Liberation Army in the late 1960s and early 1970s. Shakur was targeted by the FBI's Cointelpro program, which murdered those fighting for freedom for African people, and she was arrested and charged with murdering a New Jersey policeman, in spite of a wealth of physical evidence demonstrating her innocence- including forensic proof that she did not fire a weapon and her being shot while her arms were raised. After a mockery of justice in six trials, Shakur had one hung jury, three trials ended by dismissal of all charges and three not-guilty verdicts. On the seventh show trial, Shakur was convicted. Supporters broke Shakur out of prison and freed her.

Today, Sister Assata remains on the FBI's most wanted list, but is free living in exile in Cuba, and continues to inspire millions to fight for freedom.